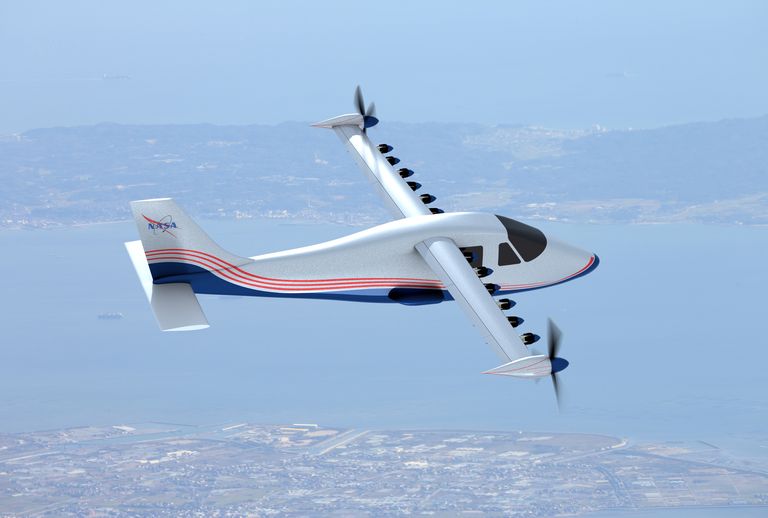 NASA's next X-plane, the all-electric X-57 Maxwell, is getting closer to its maiden flight. Engineers at Scaled Composites in Mojave, California, along with prime contractor on the program Empirical Systems Aerospace (ESAero), are preparing to integrate electric systems into a Tecnam P2006T to convert it to the X-57. The first electric version of the aircraft, known as Mod II, will replace the P2006T's gas-driven Rotax engines with electric motors and a battery pack to power the plane.

"The flight batteries have been tested and delivered to Scaled for integration, and the acceptance tests on the flight motors are ongoing," Nick Borer, technical lead on the X-57 program, told Popular Mechanics in an email. The lithium-ion battery module was evaluated in flight conditions and put through a thermal runaway test toward the end of last year, while the electric motors began endurance tests in January. The plane's instrument panel is also being modified with electric propulsion indicators in preparation for the first flight of Mod II,which Borer says will likely occur sometime in 2019.

NASA has also approved the final iteration of the X-57 Maxwell, known as Mod IV. This version of the aircraft will use 12 high-lift electric motors to accelerate airflow over the wing during takeoff and landing—a flight technology known as "distributed electric propulsion" that could provide as much as a fivefold decrease in energy consumption. The little motors, aligned along the leading edge of the wing, will shut down during cruise flight while the primary electric motors on the wingtips provide propulsion.

The version of the X-57 expected to fly next year, Mod II, will not have the distributed electric propulsion system. After NASA flight tests the electric plane, the agency plans to modify the aircraft further for Mod III by replacing the stock wing with a thin composite wing and moving the flight motors out to the wingtips. The final step will be to add the 12 high-lift motors and associated systems required to control them for Mod IV. Back in May 2015, NASA tested a distributed electric propulsion system on a test wing mounted on a semi-truck (Mod I) to confirm the little motors do in fact increase airflow over the wing to produce more lift as expected.

NASA had hoped to fly Mod II as early as this year, but delays related to the battery module pushed back the timetable for flight testing. In December 2016, the original off-the-shelf lithium-ion battery critically failed during a thermal runaway test, according to Aviation Week.NASA had to pivot to a redesigned battery module from Electric Power Systems, which completed testing in December 2017. Lithium-ion batteries can run the risk of suffering what is known as thermal runaway, where a battery cell experiences a rapid increase in temperature, possibly causing a fire and the failure of the entire system—the last thing you want at 10,000 feet.

"Like any flight program with first-of-its-kind hardware, we’ve been experiencing some delays," Borer says. "At this point it appears that Mod II won’t fly until 2019. We’re working where we can to claw back some schedule."

Despite the delays, the X-57 program has already started to benefit the electric aircraft industry. According to Aviation Week, Bye Aerospace out of Colorado conducted the first flight of its electric-powered Sun Flyer 2 in April using a battery system designed by Electric Power Systems. The lessons learned testing batteries for the X-57 helped Bye Aerospace get its two-seater electric plane off the ground, and the company hopes to certify the aircraft with the FAA in the future.

The benefit to Bye Aerospace underscores the entire purpose of the X-57 program: to share knowledge of electric flight technology with the aviation industry. Flying with heavy battery packs as a power source is a major challenge, and NASA hopes its distributed electric propulsion X-plane will provide critical data to companies that are working to build electric aircraft. With advanced battery technology from the X-57 already flying on other planes, the program appears to be doing its job.